The Harlem Globetrotters are Back in SoCal!

﻿
It’s family entertainment at its finest -- interactive, action- packed, and simply pure fun for kids and families.
I have not taken my kids and I'm super excited to! My parents took my brother and I in the late 80's and I will never forget it.
The mystery of "how'd they do that" will always be a fun childhood memory. I am really looking forward to giving my kids this experience too!
A little history...
In 1926, in Chicago, a 24-year-old businessman named Abe Saperstein formed a small basketball team called the Savoy Big Five. He was just trying to promote a nightclub called the Savoy Ballroom, but in just a few years the team had played over 1000 games around the country and become the Harlem Globetrotters.
Throughout their history, the Original Harlem Globetrotters have showcased their iconic talents in 120 countries and territories on six continents, often breaking down cultural and societal barriers while providing fans with their first-ever basketball experience. Proud inductees of the Naismith Memorial Basketball Hall of Fame, the Globetrotters have entertained hundreds of millions of fans—among them popes, kings, queens, and presidents.
New Experience to this year...


Prior to every performance, fans can secure a ticket to Magic Pass, the Globetrotters’ exclusive pregame event. Magic Pass gives fans unprecedented access to the stars of the team, an opportunity to learn tricks, shoot hoops and take pictures on the court. After each game, fans can participate in a free autograph session.*
More to the show...
An additional exciting new element fans can look forward to this year is a new interactive mobile app with exclusive features, including an augmented reality (AR) basketball toss game and one-of-a-kind image filters that can be shared on social media.
Also back by popular demand, fans will also get a chance to see the Flying Globies, an amazing acrobatic trampoline dunk team that will defy gravity during breaks in the game action.
Where to see the show...
*Walter Pyramid at Long Beach State University Friday, February 15 at 7pm.
*Citizens Business Bank Arena in Ontario Saturday, February 16 at 2pm and 7pm.
*STAPLES Center in Los Angeles Sunday, February 17 at 2pm.
*Honda Center in Anaheim Saturday, February 23 at 2pm and 7pm.
Follow along on social media too..
Facebook: https://www.facebook.com/HarlemGlobetrotters/
Instagram: https://www.instagram.com/harlemglobetrotters/
Twitter: https://twitter.com/globies @Globies
YouTube: https://www.youtube.com/HarlemGlobetrotters
Direct link to purchase southland tickets:  https://www.harlemglobetrotters.com/socal *use promo code FUNFAM to save 25% 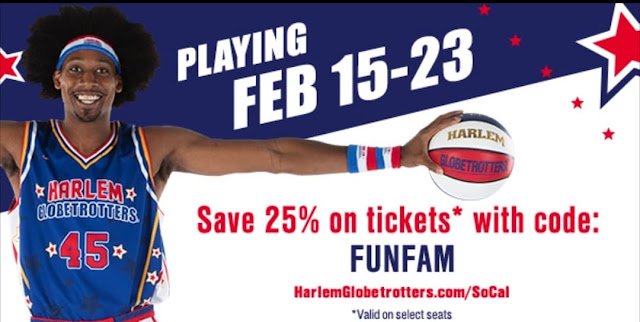 ﻿
Shoot for the stars!!
We have a giveaway for 4 vouchers to the show at Honda Center on the 23rd!
You will need to redeem at the box office prior to the show for tickets!
Enter below and good luck all.

a Rafflecopter giveaway
Posted by OnTheGoOC at 12:59 PM